A Part III of the Union Accord was successfully signed at the third and final day of 4th session of the Union Peace Conference at Myanmar International Convention Centre–II in Nay Pyi Taw yesterday.

The historic peace document is seen as a crucial step for establishing a Democratic Federal Union as it includes more detailed descriptions of procedure for future peacemaking processes.

Nai Han Thar chaired the third day of the conference, and his delegation members were Lt-Gen Yar Pyae, U Tun Tun Oo, Khun Maung Thaung and Daw Yin Yin May.

Chairman Nai Han Thar said in his opening remark that the peace conference aimed to create the best situations for the future of the country, people and organizations. National people have been trying to solve problems between each other with armed conflicts for 70 years. Still, negotiations are needed to find solutions for conflicting issues after in-depth consideration upon rooted causes.

He added the removal of inappropriate ideologies and concepts for the country with different ethnic people in finding ways of national unity.

Bogyoke Aung San led to building a genuine Union despite many challenges. However, his promises and guidelines left neglected when regaining independence of the country after he passed away. Then, the so-called Union was developed, leading to the protests of ethnic people of the nation against negligence to implement the Panglong Agreement and the non-ethnic people against failure to gain their expected fundamental rights. Authorities used weapon power to counter these protests, and then the ethnic groups unavoidably opted for armed struggles, Nai Han Thar noted.

He continued saying that struggles over 70 years were aimed to reform the wrong political system. The establishment of a genuine federal Union is also a national building task. The armed battles were unavoidably waged for national equality. The armed conflicts have not de-escalated over 70 years until now; there was no sign to solve the disputes, and that a new and correct way is needed for it.

Nai Han Thar emphasized the importance of equal rights and freedom for nationals from different backgrounds of ethnicity and faith. Attempt to influence another group will not make unity and peaceful coexistence each other; it is required to develop a Democracy Union in line with the guidelines in NCA for the peace of the country.

Every ethnic people value and preserve their language, culture and traditions, which are their ethnical identities. Sacrificing their lives for these values play a crucial role in making national unity; it is also related to the demand of self-rule by ethnic groups as it is the fundamental rights for them, he stressed.

He also remarked that Part III of the Union Accord is the initial step for a Democratic Federal Union, and more friendly discussions could be made on the issues of state constitutions and parliaments.

The members of UPDJC Secretariat then submitted proposals for the part III of the Union Accord. Retired Lt-Gen Khin Zaw presented the framework for implementing NCA, Table 1 for phase by phase implementation beyond 2020 by Saw Mra Raza Lin and the roadmap principles for the establishment of the Democratic Federal Union.

The representatives of Government, the Hluttaw, the Tatmadaw, NCA-S EAOs, and political parties supported the proposals. After signing the document by the witnesses from these groups, Dr Tin Myo Win, Dr Salai Lian Hmung Sakhong and U Thu Wai presented it to Chairman Nai Han Thar.

Lt-Gen Yar Pyae, the presiding member of the conference, made a concluding remark on the conference, saying that the Part III of the Union Accord has agreed on the future peace process, the establishment of a Democratic Federal Union, creating a condition for further negotiation in the post-2020.

An agreement has been made for the five basic federal principles; sensitive issues and interests of relevant groups were carefully discussed; it can be concluded that frequent meetings could reduce worries and doubts.

He also advised the stakeholders not to leave peace talks. He said that as the future negotiations are essential for the peace process of the country, the long-sightedness is needed to overcome the conflicting situations.

Lt-Gen Yar Pyae added that the local people in conflict-torn had suffered hardships in livelihoods, poor education and less development. The previous Governments could try for the existence of sovereignty amidst many challenges.

He also pointed out the need to safeguard the sovereignty of the country as it is bordering with the countries with a large number of population, while the ethnic armed groups are operating at the border areas.

He continued to say that the agreements in NCA include the establishment of a Democratic Federal Union, and it is required to persuade more ethnic armed organizations which are not taking part in peace talks related to the NCA.

He concluded the speech with the common goal for peace and the need to continue peacemaking efforts amid COVID-19 pandemic in line with healthcare guidelines while working for the 2020 General Election.—MNA 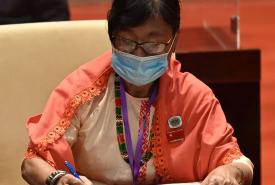 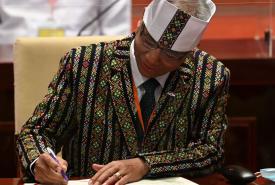 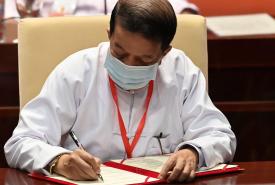 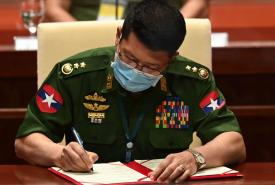 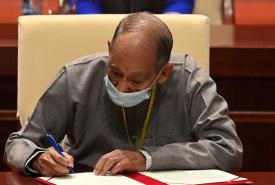