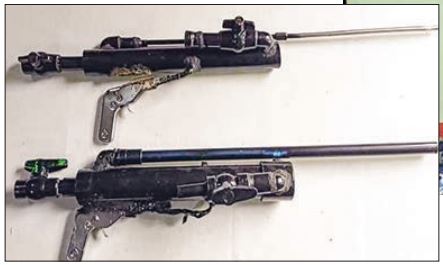 THE terrorist groups CRPH, NUG and PDF intentionally send the youths to the ethnic armed groups for military training to destroy the State stability and attempt to commit bomb attacks and arson attacks in public areas and schools and attack the teachers.

The security forces arrested Thein Thein Ei (aka) Kala Ma at her house in Nan Taw Gone Ward of Meiktila Township for sending the information about the movement of the security forces to Aung Chit Ko who completed PDF training on 26 July.

According to the confession of Thein Thein Ei (aka) Kala Ma, Aung Chit Ko who returned to Meiktila after the training of TNLA at 7 Star grocery in Inwa street of Zay Ashe Pyin Ward on 27 July, including the shop owner Pyi Thu and his wife Soe Noble.

Based on the words of suspects, the police also seized two homemade guns of Aung Chit Ko at Lucky Star grocery (branch) yesterday.

According to Aung Chit Ko, he conducted bomb attacks on the Meiktila district education officer office and township administrative office in Zay Ashe Pyin Ward together with Thurein Soe on 27 July. On 6 May, Thurein Soe, Htin Lin, Wai Hmue, Khaing Mye Zaw, Tayoke Lay, Kyaw Zin Han, Pan Char and Htet Wai Yan also shot, with slingshots, the teachers who held a meeting at B.E.P.S (30) of Mazalibin Village of Kywal Tain Village tract of Meiktila Township to reopen the schools and destroyed three motorcycles of teachers in the school compound. Moreover, on 7 May, they set fire to six motorcycles of teachers in the district education officer office in Thiri Mingala Ward. These explosives were received from the suspect Soe Yan Nain, who died in an explosion at Shwe Lin Pin Inn on 6 June.

The suspect Aung Chit Ko joined the explosive training of TNLA at Ohn Thee Village of Khun Kaw of Kyaukme Township in Northern Shan State from 5 to 25 May under the instruction of Zin Min Phyo (still at large) who was charged under Section 505(a) on 18 May.

The suspects Pyi Thu and his wife Soe Noble urged and protected Aung Chit Ko who possesses the weapons to commit destructive activities.

Therefore, these four suspects who attempted to affect the state stability and the rule of law will face legal actions under the law and the authority urged the people to report the activities and hiding places of remaining suspects secretly to the officials, and to cooperate with the security forces to ensure the stability. — MNA