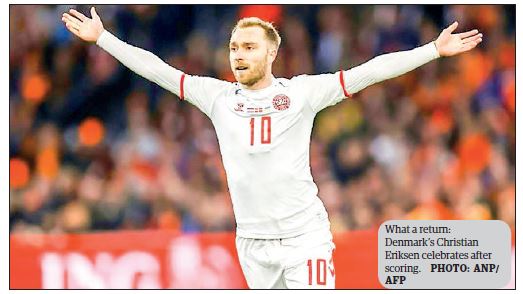 DENMARK’S Christian Eriksen made an emotional goal-scoring return to international football on Saturday as England, Germany and Spain carved out friendly victories. Eriksen found the net two minutes after coming on with a powerful drive in a 4-2 defeat against fellow World Cup qualifiers Netherlands in Amsterdam.

It was his first national team appearance since suffering a cardiac arrest in Denmark’s opening game of the European Championships against Finland in Copenhagen last June. On Saturday, to the resounding applause of fans and even Dutch manager Louis van Gaal, the 30-year-old came off the bench and raised his hands to the sky in thanks. His goal was 37th in 110 appearances.

It was fitting he scored in the Amsterdam Arena, the home of Ajax. Eriksen came through the ranks at the Dutch side, making 162 appearances for the club and winning five trophies, including three consecutive league titles between 2011 and 2013. Meanwhile, Harry Kane converted a late penalty to close in on the all-time England goal-scoring record and secure a 2-1 win over Switzerland who will also be at the World Cup in Qatar in November. Kane netted from the spot to reach 49 England goals, moving him ahead of Gary Lineker and into a second place tie with Bobby Charlton. Only Wayne Rooney, with 53 goals, has scored more times for England. — AFP