THE terrorist groups CRPH/ NUG committed incitement to the NLD members/supporters, CDM participants and extremist youths to organize PDFs to perpetrate the acts of terrorism. They also organized explosive training and sent those who completed the training to large cities to launch terrorist attacks.

In the cases of arresting the suspects who committed attacks in Hlinethaya Township on 30 April, according to the confession of five suspects including Sai Phyo Ko Ko and Shine Htet Aung, they completed the training in KNLA Brigade (1) area near Kawkat Village of Kyaikto Township. The Brigade (1) of KNLA accepted the PDF terrorists and gave terrorist training and attacked the military camps, headquarters and police outposts with rockets and also killed the military members and their families in ambush.

Moreover, the police arrested 173 suspects, including Khin Kyaw (UNRA) and Ko Ko Naing (aka) Dawna who opened the explosive training and launched terrorist attacks in June together with 131 types of firearms, 559 grenades, 22,513 homemade bombs, 1,473 40mm bombs, 14 RPGs and other materials.

Khin Kyaw (UNRA) and Ko Ko Naing (aka) Dawna admitted that they constructed a base near War Hni Kho village of KNLA Brigade 1 area and conducted explosive training for PDF to destroy the government’s administrative mechanism, including the public with the assistance of NUG and CRPH.

The members of KNLA Brigade 5 taught how to use explosives and small weapons and also sold the ammunition and other explosives. On 24 June, Tatmadaw conducted land security operations in the area of UNRA for security.

According to the words of Myo Myint Aung (aka) Ashay Gyi (aka) San Shay, UNRA member, who was arrested at Amay Ain hotel in Toungoo Township on 31 March, Wai Yan Thein (aka) Victor, who launched bomb attacks in Yangon including Music Zone KTV, EPC offices of Kamayut, North Okkalapa and Thingangyun townships, arrested on 23 August and Kyaw Kyaw (aka) Kachin Kyaw Kyaw arrested in Toungoo on 1 November, it is learnt that Pyay PDF of former No (2) Region Hluttaw MP Kyaw Zeya of Pyay NLD, Toungoo PDF of former No (2) Region Hluttaw MP Moe Makha of Toungoo Township, Phyu PDF of former Pyithu Hluttaw MP Kyaw Aye Win of Pyu Township communicated with Maung Shwe of KNLA Brigade 2 and conducted terrorist training in the eastern area of Taw Gone village of Htantabin Township and killed the innocent people. Therefore, Tatmadaw made land security operations and occupied five PDF camps and arrested five terrorists together with arms and ammunition.

According to their confessions, KNLA Brigade 2 taught the lessons regarding small weapons and explosives. Kyaw Zeya ordered about 100 firearms from KNLA Brigade 5 to provide them to PDF members. If he receives the arms, he will give them to the Phyu, Ottwin, Toungoo and Pyay PDFs and send them to their respective townships to launch at tacks. They also communicated with the KNLA Brigade 2 and KNU Toungoo District administration body member Wa Gyi to order the needed raw materials to make homemade bombs at PDF stations.

Another four suspects including Htay Min Aung, who committed bomb attacks in front of Yangon Region Auditor-General Office in Ahlon Township on 24 May, admitted that they joined the explosive training conducted in Kyaukkyi Township of KNLA Brigade 3 area. The KNLA Brigade 3 taught military and explosive courses to PDF terrorists and accepted those who are still at large.

Terrorist group leader Myat Thu (aka) Nat Soe who committed bomb attacks in Yangon and was arrested at hotel 46 in Dagon Myothit (North) on 14 November and Sit Zaw Kan (aka) Han Thar Tun who participated in killing U Thein Aung of Mytel head office testified that they completed the training of Brigade 6 near Kya-inSeikkyi township and southern PDF in charge Lwin Ko Latt of CRPH/NUG and Saw Yan Naing of KNLA attended the graduation ceremony.

According to Aung Ko Oo who was arrested in Thingangyun Township on 16 November, he attended batch 3 of PDF training conducted between 5 May and 20 June in the warfare area of battalion-18 in Bawdaing of KNLA Brigade 6. He also opened SOF terrorist training between 22 July and 30 August near Thephyu Chaung of warfare area of battalion-16 of KNLA Brigade (6) together with others who were in the same batch and Lin Lin (aka) Mr Bot, American citizen, trained the urban guerrilla tactics.

Another suspects – Saw Nyi Nyi Min Htet and Zin Ko Ko – who were arrested with firearms at Chaung Hnakhwa Village of Kyaikmaraw Township on 13 November, admitted that they joined the training in KNLA Brigade 6 headquarters in Makkatha Village of Phayathonzu Town.

Moreover, Wai Yan Phyo and Zeyar Lwin who were arrested with ammunition near Hpa-an Education Degree College on 17 November, said that they attended the explosive training of KNLA Brigade 6 near Lay Kit Kaw Myothit of Myawady for two weeks.

According to the confession of Naing Lin Tun who was arrested in Hpa-an Township on 11 September, he completed the training of Brigade 6 at Yaytagun station near Lay Kit Kaw Myothit of Myawady Township and Tarbokhee station (locally called) in the eastern part of Dawna Hill and made the mines in practical sessions.

According to the confession of former Zabuthiri Township Pyithu Hluttaw MP Maung Kyaw (aka) Phyo Zeyar Thaw who controlled the terrorist attacks in Yangon and was arrested on 19 November, the arrested suspects who launched attacks in Yangon Region attended the explosive training of Saw Yan Naing of KNLA Brigade 6 and the seized weapons were bought by southern PDF in charge Lwin Ko Latt and northern PDF in charge Yi Mon of terrorist groups CRPH/ NUG and they communicated with KNLA members and transported the weapons via land or sea route via KNU areas.

According to the confessions, KNLA Brigade 6 accepted the PDFs in their area and provided explosive training to them. They also attacked military columns and bases and committed mine attacks together with them. In order to do such activities, Saw Yan Naing of KNLA Brigade 6 received the assistance of NUG, CRPH and other foreign aids.

Moreover, Phyo Wai Lin (aka) Ko Jett and Nyi Nyi Lwin who were arrested in robbery case of Poh Poh jewellery shop on 12 May admitted that they completed the training of KNLA Brigade 7 in Hngetpyawtaw station and Brigade Commander Saw Phaw Doh of KNLA Brigade 7 took them to the station from Hti War Pa Law village of Myawady Township. Then, they joined the training there for two weeks. The training courses were conducted by Saw Phaw Do with the assistance of CRPH/NUG. They have to launch the acts of terrorism by linking with the leaders appointed by CRPH/NUG when they arrive at their respective regions.

According to the confessions of suspects, the CRPH/ NUG sent the NLD members/ supporters, CDMers and extremist youths to the terrorism and explosive training conducted in ethnic armed group-controlled areas with their own plans. Those who completed the training have to launch bomb attacks, kill the people who want peace and the close ones of governmental departments under the name of informers to affect the governance mechanism, attack the security members, commit arson or bomb attacks on schools to threaten the teachers and students by taking weapons via the terrorist leaders appointed by CRPH/NUG when they return to their respective townships. 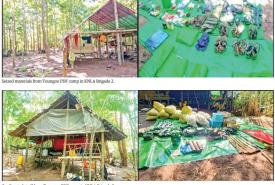 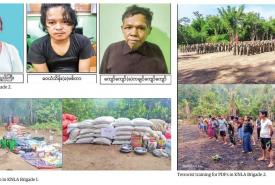 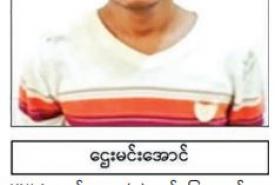 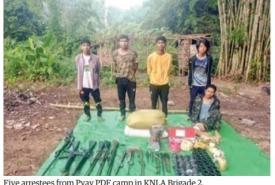 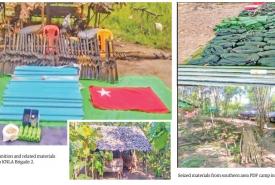 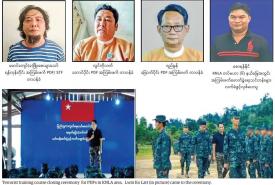 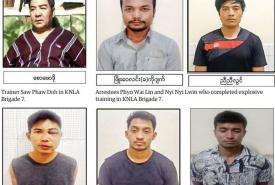