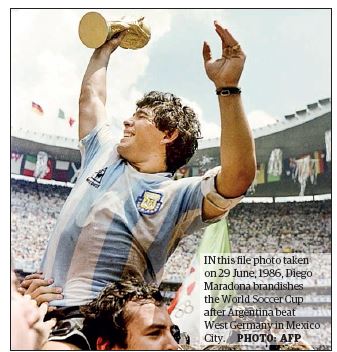 JAVIER Maluf will quietly put on a shirt worn by Diego Mara­dona against England, but other fans at the World Cup have more noisy plans for Friday’s second anniversary of the death of the flawed genius.

Argentina’s legion of sup­porters may also be praying to the sporting gods that the late football great can still inspire his country to victory over Mexico on Saturday to keep their hopes in Qatar alive.

Maluf is like many Argen­tina fans who have never fully recovered from Maradona’s death from a heart attack at the age of 60.

The shirt that Maradona wore during a game against England at Wembley in 1980 is the prized item in Maluf’s col­lection of 1,000 game-worn foot­ball jerseys that he estimates is worth $1 million. “I will put it on for a while as a sign of respect,” he told AFP at his Doha home, where the shirts and other sou­venirs are kept. — AFP