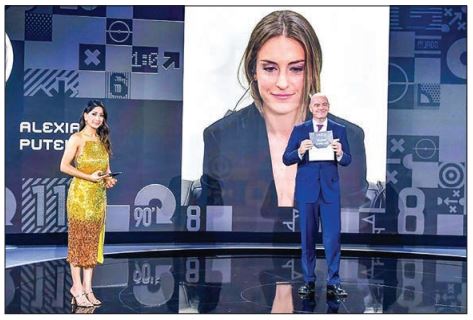 The 33-year-old Lewandowski set a Bundesliga goal record last season, and edged Argentine Lionel Messi of Paris Saint-Germain and Egyptian Mohamed Salah of Liverpool for the award. “I’m happy and honoured to win this award, and I feel very proud,” said Lewandowski who scored a total of 48 goals for club and country in 2020-2021. Lewandowski scored three times for Bayern at the weekend taking his 2021-2022 season tally to 39 goals in 33 matches.

The trophy was some consolation for the Polish striker who lost out to Messi for the older and rival award the Ballon d’Or in November.

For Putellas, it marked an awards double as the Spaniard triumphed over Barcelona team-mate Jennifer Hermoso and Chelsea’s Australian striker Sam Kerr, just as she did for the Ballon d’Or. The 27-year-old midfielder enjoyed an exceptional 2020-2021 season with Barcelona, leading the Catalans to the Spanish league and cup double as well as the Champions League.

“This trophy is for everyone in the team,” Putellas said. “The trophy will be an inspiration for us all.” The best starting women’s 11 however featured no Barcelona player.

Cristiano Ronaldo won the Special Award in recognition of setting a record of most international goals scored for his country, beating Ali Daei’s long-standing mark of 109 for Iran. — AFP