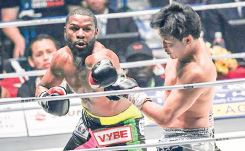 FLOYD Mayweather knocked out mixed martial arts fighter Mikuru Asakura in the second round on Sunday in Japan in the latest of the boxing great’s post-retirement exhibitions.

The 45-year-old Mayweather floored his opponent with a right hand as his former welterweight foe Manny Pacquiao watched ringside in Saitama. The American Mayweather, who retired in 2017 with an unbeaten 50-0 record, afterwards dis­missed any prospect of a fight with the similarly retired Pacquiao.

Mayweather arrived at Saitama Super Arena, north of Tokyo, just an hour before the fight. He was shown on TV relaxing in a dressing room full of takeaway fast food, prior to making his ringwalk. On another easy payday for the self-styled “Money” Mayweather, the bell to end the second round sounded as Asaku­ra hit the canvas, but it failed to save the Japanese fighter and he was unable to beat the count.—AFP