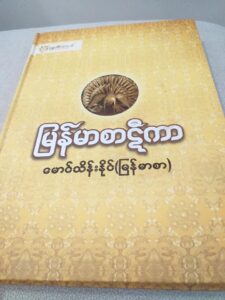 National literary awards for the year 2019 were announced on 5 December 2020.

The second revised edition of Saya ဂုဏ်ထူး Goandoo U Thein Naing’s မြန်မာစာဋီကာ Myanmar Sar Hti Kar was published in the late 2019 or early 2020, and therefore it is ineligible to be considered for the 2019 national literary prize. Moreover, the prize rules are such that only the first edition of books published in a particular year is eligible for the national literary award for that year.

The first edition of U Thein Naing’s very significant contribution to the development of Myanmar Sar specifically (but not limited to) linguistics concerning our official language was first published in the year 1969. After a hiatus of more than 50 years, the republication of U Thein Naing’s treatise is to be enthusiastically, gratefully welcomed. National literary awards for the year 2019 were announced on 5 December 2020.

The second revised edition of Saya ဂုဏ်ထူး Goandoo U Thein Naing’s မြန်မာစာဋီကာ Myanmar Sar Hti Kar was published in the late 2019 or early 2020, and therefore it is ineligible to be considered for the 2019 national literary prize. Moreover, the prize rules are such that only the first edition of books published in a particular year is eligible for the national literary award for that year.

The first edition of U Thein Naing’s very significant contribution to the development of Myanmar Sar specifically (but not limited to) linguistics concerning our official language was first published in the year 1969. After a hiatus of more than 50 years, the republication of U Thein Naing’s treatise is to be enthusiastically, gratefully welcomed.

Snippets of Saya U Thein Naing’s short biography including some of his literary works can be read in the book itself. This section is only a brief, personalized ‘glimpse’.

When the announcer read (apparently in English based on what U Thein Naing told me over 60 years later around 2018), ‘Roll No… Maung Thein Naing distinction in Burmese)’ Maung Thein Naing’s teacher Budalin Chit Lay jumped in joy, overturned the tables, broke the cups and saucers, so he had to reimburse the tea shop owner. Perhaps only a day or so later Maung Thein Naing heard of his success.

Saya U Thein Naing also told me that during the year he matriculated there was one Burmese paper but two English papers perhaps of two hours’ duration each and he obtained a total of 143 or 144 marks out of 200 and thus missing the distinction (150 marks out of 200) in English as well by six or seven marks.

Maung Thein Naing obtained 82 or 83 marks out of 100 in the matriculation Burmese paper of 1955 and even if he was not the sole holder of a distinction in Burmese during that year he certainly achieved the highest mark. A few months ago around August 2020, U Thein Naing told me that he might be the first matriculate in the post-War matriculation exams starting from 1948 (till 1954) to obtain a distinction in Burmese! That statement, in my humble opinion, needs to be verified- i.e. if there are archives or records of such results going back to over 70 years and if records of the Matriculation results can be accessed.

Incidentally, a personage slightly older than Saya U Thein Naing stated in his (that ‘personage’) brief ‘self-prepared’ CV of 1971 that he passed ‘third standard’, but in the CV of 1985, the same person claimed that he passed (without stating the year that he did) the Matriculation exam!

Usually, in the Matric papers for Burmese, there were three essay questions, and candidates have to choose one of the given essays and write about it. The essay question that Maung Thein Naing chose was အချိန်ကိုလေးစားအပ်ကြောင်း (‘We ought to respect time’).

In one of the reproductions, in the year 1970, in the typed script or cyclostyle of his Burmese distinction winning essay of 1955 U Thein Naing reproduced his essay and reminded the students and (in his own words that he had used ‘unnecessary rhymes and sort of doggerels’ ကာရံ နဘေ ထပ်၍ according to the style of the 1950s and that နောက်လူအတွက် သင်ခန်းစာ ဖြစ်သင့်သည် ‘the previous generation’s mistake should be taken note by subsequent ones’. One florid or arguably pompous expression Maung Thein Naing used was အချိန်ကိုလေးလေးစား၍ ယင်းအချိန်တို့ကို ဒုစရိုက်မှုနှင့် သာ ပျော်မွေ့နေလျှင်ဂင်္ဂါဝါ ဆူဆူဆုံး တိုင် တူတူပုန်းရချိမ့်မည်(‘If you respect to time but spend it on unwholesome deeds then until the water of Ganges river boils you would have to play hide and seek’).

According to Saya U Thein Naing the late မြန်မာစာပါမောက္ခ ဦးဧမောင် Burmese professor U E Maung (1905-1985) (not to be confused with တရားဝန်ကြီး ဦးဧမောင် ကန်တော့ the Supreme Court Justice E Maung, 1898-1977; both names are spelt exactly the same way in both Burmese and English) was the Professor of the Burmese Department at the University of Rangoon. In those days, generally, matriculation papers that are to be awarded distinctions had to be approved by the Professor or Head of the concerned Department. U Thein Naing told me (perhaps he heard through the grapevine?) a Lecturer in Burmese had to ကန်တော့ give obeisance to Professor U E Maung almost beseeching him to have a look at the paper of Maung Thein Naing so that he could see it was worthy of a distinction in Burmese. And Professor U E Maung did award Maung Thein Naing a distinction in Burmese.

Even during this Covid period, Saya continued to teach through Zoom or video conferencing until around mid-November 2020 when he fell and broke parts of his leg and hip and is (as of 8 December 2020) recuperating after an operation in a Yangon hospital.

‘History of Burmese Literature’ and ‘A Commentary on Myanmar Sar’

In 1938 the book မြန်မာစာပေသမိုင်း Myanmar Sarpay Thamaing  (‘History of Burmese Literature’ (the first few editions did have English sub-titles) (mainly) authored by the late Sayagyi (‘revered teacher’) U Pe Maung Tin (24 April 1888-22 March 1973) was published. I have had the chance to read, in its entirety, Sayagyi’s U Pe Maung Tin’s treatise twice while abroad: first in Los Angeles in the United States in December 1983 and the second time in Port Vila, Vanuatu (a country in the South Pacific) in August 2004.

Sayagyi U Pe Maung Tin’s work can be said to be a study of Burmese literature starting from the Pagan (Bagan) period.

Saya U Thein Naing’s book can be considered a historical, linguistic and philological study of the Burmese language going back (as stated in the first Chapter of Myanmar Sar Hti Kar ) to ancient India of Gautama Buddha’s time.

Snippets of Chapters in A Commentary on Myanmar Sar

The very first sentence of the first Chapter indeed of the book မောင်သိန်းနိုင်(မြန်မာစာ) Maung Thein Naing (Myanmar Sar) stated that (in my own translation) ‘all paleographists unanimously accept that all the Myanmar alphabets originated and are derived solely from the Indian alphabets’ (page 40) and the Chapter traces not only the genesis (so to speak) of the Myanmar script or alphabet but those of the Pyus (page 47), Rakhine (page 49). The lithic inscriptions that are reproduced of ancient Mon scripts, as well as part Pali scripts pages 63 to 64 (as well as in other pages), are of great value. Saya U Thein Naing also acknowledged the sources from which the photos were reproduced.

The first and second Chapters (on the naming and usage of Myanmar alphabets) is quite technical and intricate (in the complimentary sense of the words). To most readers, including myself, as a dilettante, it can be quite heavy reading.

Parts of Chapter 3 မြန်မာစာလုံးပေါင်းရေးနည်းစနစ် _ (’The system of writing correct spellings in Myanmar’) and Chapter 12, မှားတတ်သော မြန်မာရေးထုံးမျာ (‘Spelling and Structural Errors when writing in Myanmar’) (pages 181 to 194) can be read with great benefit, especially by (but not limited to) journalists and writers.

One of the Chapters which this writer is particularly interested is relatively quite short. It is Chapter 25 (pages 311-14) မြန်မာ ဝါကျမှန် တည်ဆောက်မှု regarding ‘Construction of Correct Myanmar sentence structures’. From the Matriculation exams held in 1969 to (perhaps) about 1986, there were compulsory matriculation questions to rewrite infelicitous, awkward in fact ungrammatical Myanmar sentences.

I recall that 50 years ago in 1969 in his tuition classes Saya U Thein Naing gave excerpts of the examples from the writings of eminent Burmese writers such as Theikpan Maung Wa (U Sein Tin) (5 June 1899-6 June 1942) and (U) Thein Pe Myint (10 July 1914-15 January 1978) who made such (shall we say) awkward sentence structures. In his book, U Thein Naing does not reproduce the examples he gave 50 years ago in his classes which can be discerned in the writings of such literati.

Perhaps two examples excerpted from a speech or statement made by two personages in recent years can be given here.

On 27 August 1962 then Chief Court Judge (as he then was) Dr Maung Maung (31 January 1925-2 July 1994) in the case of မောင်ထွန်းစိန် (အယူခံတရားလိုနှင့် နိုင်ငံတော်အစိုးရ) (အယူခံတရားခံ)  Maung Tun Sein (appellant) and the State (respondent) written in Burmese 1962 Burma Law Reports, (Chief Court) page 337 at 338 states: In the phrase, အကြောင်းမဲ့ သက်သက် ထ၍ ဒါးနှင့် ဦးခေါင်းနှင့် လက်တို့ကို ခုတ်သတ် အကြောင်းမဲ့ သက်သက် (‘without cause) should qualify the ခုတ်သတ် ‘cutting’ (verb) and not ‘stand up’ ထ၍ since ‘without a cause’ is not to qualify the standing up but the hitting of the nearby persons by the defendant-appellant without any cause or provocation. Hence a better sentence structure would be … ထ၍ ..ဒါးနှင့် ဦးခေါင်း၊ လက်တို့ကို အကြောင်းမဲ့သက်သက် ခုတ်..

It might be ‘protested’ that in all the above three examples, the meaning or the intent of the speakers or writers were (and are) clear enough to most readers. Still, as stated above, over a million matriculation candidates for about 15 years were asked in their exam answers to correct infelicitous, ungrammatical Burmese sentence structures. U Thein Naing also discussed with examples in a Chapter albeit only briefly. This writer has ventured to provide further examples above.

For those who write, on a regular basis, for newspapers, magazines and journals it is strongly recommended that if they do not have the time or the inclination to read any other Chapters, then they should at least read Chapter 11 မြန်မာ စာလုံးပေါင်း ရေးထုံး ( Writing correct Myanmar spelling) the written language) (pages 171-180) and Chapter 25 မြန်မာဝါကျမှန်တည်ဆောက်ရေး (‘On constructing correct sentence structures’) (pages 311-14).

As stated above, as of 8 December 2020, Saya Goandoo U Thein Naing is recuperating in a Yangon hospital, after an operation. This contribution is a ‘note of appreciation’ and only a glimpse of Maung Thein Naing (Myanmar Sar)’s landmark work. I hope that Saya will fully recover. I also wish him well for his health and longevity.